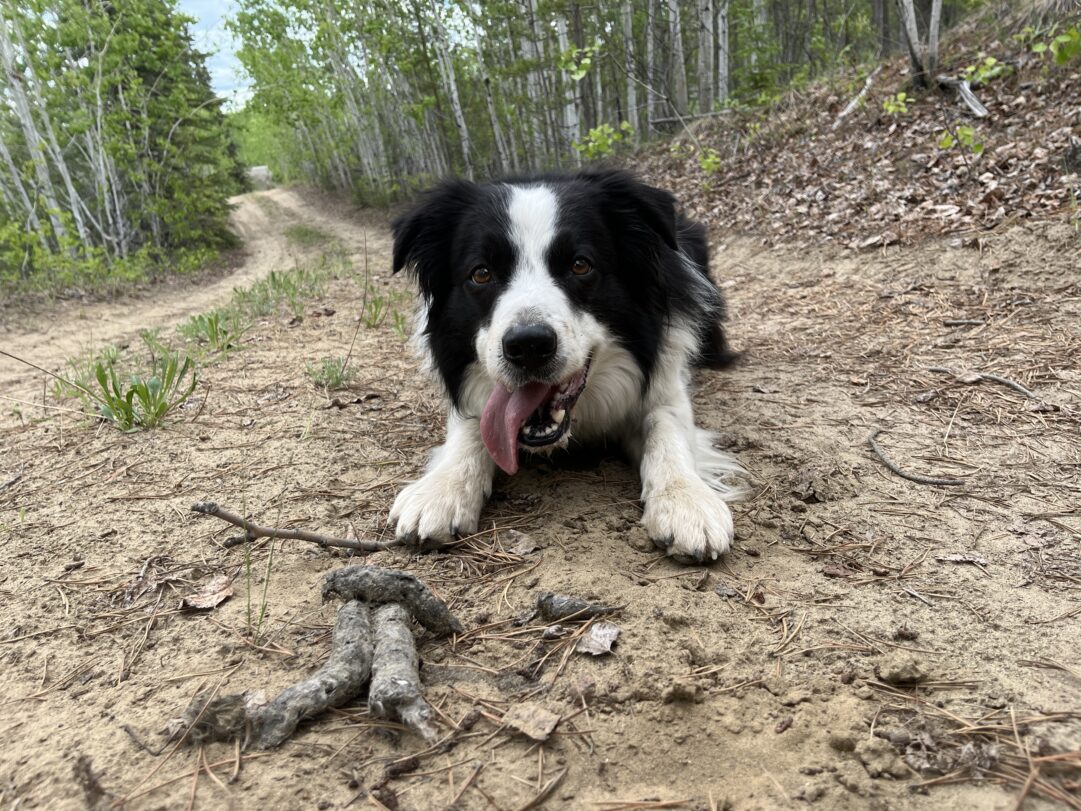 As outlined in the article, detection dog searches could yield up to 44.6% nontarget species samples! Rather than assuming handler and/or dog error, DeMatteo et al. investigated three theories of how samples could be affected and ultimately collected as assumed target samples.

The Research: Questions and Methods

This study took a three-way approach to investigate sources of possible generalization in the detection dog, and possible contamination that would affect the genetic profile of the sample. Each avenue is helpfully laid out in Figure 1 from the original article:

To test the effect of urine on the genetic profiles of scat, researchers collected domestic cat scat, dried it in the sun to mimic field samples, and then dropped a typical amount of canine urine from a urine mark on

samples, where it was allowed to dry for another 72 hours. Scat and urine samples were taken from domestic animals to ensure known genetic profiles.

To test the accuracy of the detection dog, researchers ran several different surveys. The detection dog in question was a male Chesapeake Bay Retriever trained on the scat of five different carnivores. DeMatteo et al. tested three different realms of the dog’s accuracy:

Each session consisted of 2-3 trials with 10-14 odor stations each, and the dog was handled and rewarded as he would be in the field. When testing the dog’s accuracy with target urine, urine from captive cougars was dropped on nontarget scat as well as the ground alongside genetically confirmed wild cougar scat.

The dog’s detection search included cougar scat placed at the beginning, middle, and end of the search area with both domestic dog scat that had consumed cougar scat and others that had only been fed kibble.

The cougar scat and the coyotes’ normal diet each contained a different color of glitter to examine the composition of their scat later. In the field camera trials, a single cougar scat was placed in the center of three trail cameras at 8 different sites and monitored for 14 days.

The results of this survey were simple: all of the domestic cat scat samples tested with the genetic profile of a domestic dog.

The next trials investigated the dog’s accuracy with nontarget species that consumed a similar diet as the target species. This trial was simple for the detection dog; he had a negative response to all the domestic dog scat, and a strong positive reaction to cougar scat.

The coyote trials confirmed nontarget species will interact with target scat. The coyotes were seen consuming, rolling in, and marking the target scat. When the coyote scat was searched by the detection dog, the scat without access to cougar scat received a negative response. However, scats that were primarily cougar scat and other mixtures of “normal” scat and cougar scat caused a strong positive response.

So… what does this all mean?

Essentially, now we know many different factors can cause an alert for a nontarget sample. Not all incorrectly collected samples fall only to handler and/or dog error. Behavior from nontarget species – marking, consumption, etc.- can cause an olfactory response in a detection dog that just does not line up with the genetic profile. Moreso, these “imposter” samples can look like target scat from a handler’s point of view. This research suggests the need for handlers and detection dog organizations to consider stricter collection procedures, such as only collecting fresh samples or simply a deeper evaluation of possible interactions with nontarget species in the area.

As with all research, this study had its limitations. The biggest limitation is the sample size of only one dog with a handful of trials. More dogs with more trials would expand the data observed within this study and create stronger correlations. Much of the samples used in this study came from domestic or captive animals. Expanding to more wild samples and conditions that are closer to field conditions would also bolster this data.

Overall, this study brings interesting information into the realm of field samples and the accuracy of detection dogs. As you work your dog next, consider what could be interfering with your search, especially the interaction of nontarget species with your target. There might be more factors than originally meets the eye!