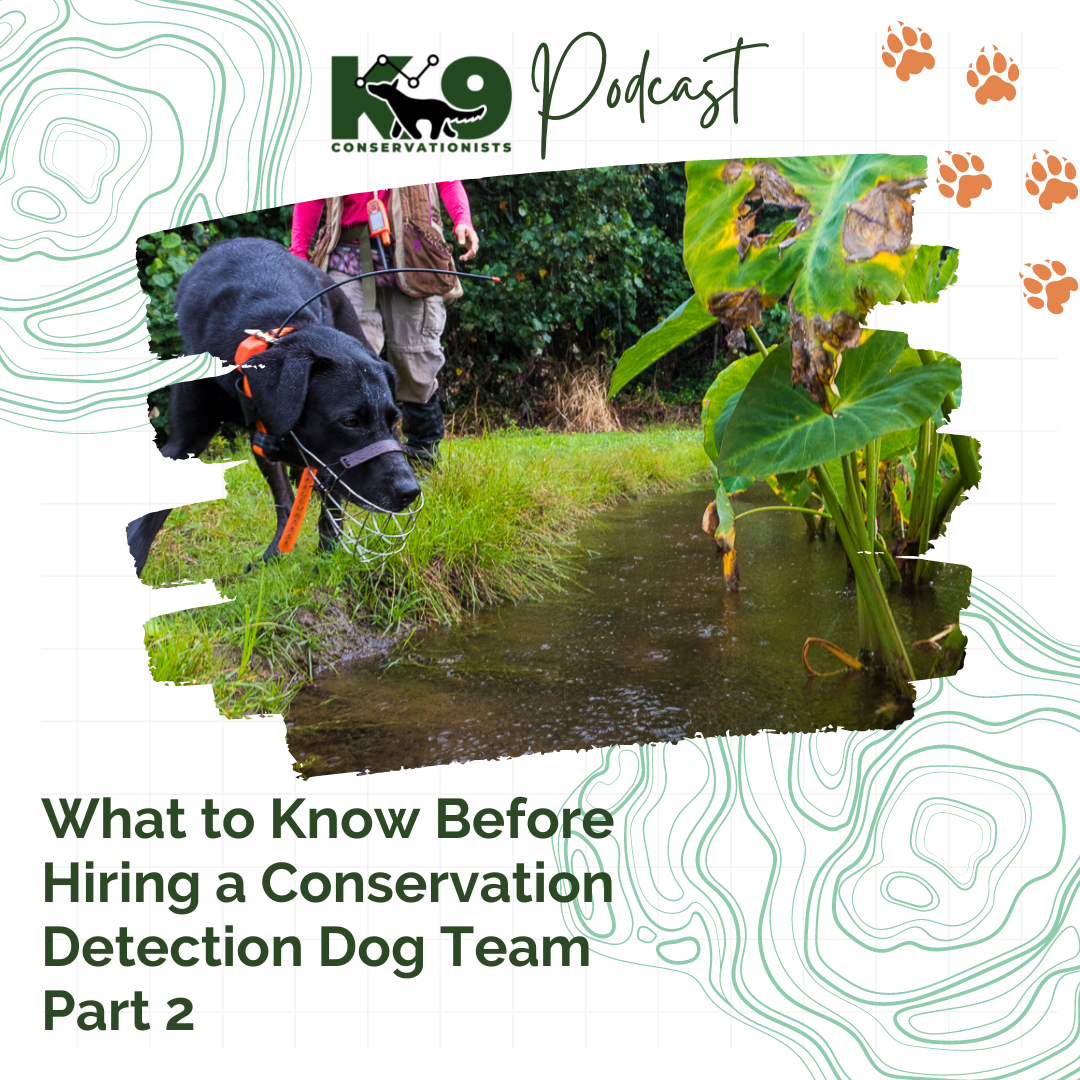 In this episode of K9 Conservationists, Kayla is back for part two with Kyoko Johnson from Conservation Dog Hawaii and Jennifer Hartman from Rogue Detection Teams to continue their talk about things to know before hiring a conservation detection dog team.

What hazards might the dog-handler team be facing in the field? How can these be mitigated or avoided? What levels or types of risk are unacceptable?

How does the use of CDDs compare to other methods in its level of acceptability to the local community, esp. Indigenous cultures?

Where are samples going to be sent/analyzed?

What ancillary data, in addition to detections, should be collected by the handler (e.g., time, weather conditions, related field samples of vegetation or soil)?

Can the dog teams access the study area to train and/or do risk assessments prior to project start?

Is there funding secured for the project?

Are the teams you’re hiring experienced enough for this job?

There is a common misconception that the main part of what CDD trainers do is imprint odor on a dog, but that is usually the easiest part.

There is SO much more to the training and work – reading changes in behavior, teaching discrimination for targets vs non-targets, proofing off of distractions, understanding weather patterns and weather conditions and their effects on odor and the dog’s detection, how to effectively work a dog off-leash, etc. Understanding that it’s dog and handler teamwork, and not just a robot blindly following the dog at the end of the leash.

Kyoko gave the example that Hawaiian petrel and band-rumped storm petrel nest in similar terrain and elevation, even if their colonies may not overlap. If the burrow locations are unknown and you’re searching a large area, then it’s possible the dog teams might run into both species. It saves effort, time and money if dogs can search for multiple species simultaneously, and gives dogs more opportunities for finds. In NZ, they have had little blue penguins move into petrel areas, and the dogs started finding them, which was okay because both are species of interest. Without a burrow camera, you can’t tell which one the dogs are alerting on.

Another example – Dog could be trained on multiple completely unrelated species if there isn’t a crossover issue. Could be a seasonal thing (so the dog can work throughout the year), or could be for different locations.

What is the timeline for this project?

Jennifer suggests for any pilot project at least 7 to 10 days. Dogs are not a magic trick. We’re often called in last after all the other methods don’t work so there is a lot of pressure put on the methodology to work, but when developing new methods (i.e. for caterpillar larvae or viruses in plants) the R&D takes time, and researchers need to be realistic about pilot projects with new species.

If the team/ program that a researcher is going with doesn’t have prior experience with said target, realize that there will still need to be the same amount of “start-up” to the project because different teams/ programs operate differently. It’s often why we suggest going with a team or program that has already surveyed a particular species (an example is when Rogue was approached to do bumblebees, they suggested going with CDCI because they already had a year of developing the method). The intent is not to get more work, rather, it’s to support the method and if a team has a proven track record for a particular species, it might be best for conservation funding to go with that team.

Have you found the dog team that’s the best match for your project?

Because the different programs operate differently, I also think it’s important to speak with different ones to learn how they work. I think a lot of project investigators already do this, but I think it’s mostly to learn about the cost. Cost is not the most important factor. Expensive without a track record of success is the same as super cheap without a track record of success. Often we are working alongside or very close to and with the researchers, and realizing that it will be developing a relationship is important.

Along these lines, it’s important to share information with researchers/biologists about the detection dog methodology so that they have a better understanding of what factors will lead to project success, i.e. not just cost or convenience. Otherwise, it will be challenging for them to know what to look for. So I think it’s the joint responsibility of conservation dog trainers and organizations to share this type of info in podcasts like this, magazine articles, etc. rather than only talking about how successful particular projects were.

Do you need input from the team on project design?

Not all detection teams or programs offer this (or want to offer this) but one thing we are trying to do is elevate the role of our teams in project design. The people handling the dogs know how the dogs work, so simply hiring a team and placing them in the field does not necessarily equal success. So, as an example, depending on the landscape and target, surveying transects may not be in the best interest of the project. Learning about the environment, landscape, & project goals, allows for the detection team to be a collaborator on the project, not just a hired gun, and the project can only benefit from this expertise.

Avian botulism and upcoming downed seabird projects are examples where we wanted more input in study or trial design. Often researchers will propose a few week period to do a human vs K9 team comparison trial in an operational setting, and unless there is a guarantee of tons of targets, it’s not enough time to gather meaningful data for a comparison. We’ve suggested longer periods and/or SEEF trial model of wind farms, where random blind hides are placed out for both sets of searchers in order to provide more accurate assessment of searcher efficacy.

Health concerns- are there unique aspects where the fieldwork will occur that detection teams need to take into account when planning, such as special vaccinations needed, dog food, and veterinary care in another country?

Have you considered weather/ terrain/ climate/ schedule through the lens of a dog team?

Dogs are not machines, they are living/ breathing and even though they are high energy, their energy is exhaustible. There are different factors that affect how dogs work, how far they can go in a day so what a researcher might have read in a paper may or may not be applicable in their particular region. Speaking with the detection teams about expectations prior to surveys: for example on some projects we work at night due to intense heat but you can’t do this in a place like Africa, because that’s when the predators are active.

Surveys might need to occur two times in the day to get the overall coverage a researcher is hoping to get (working very early in the morning, stopping during the middle of the day, and back out again in the evening). On some projects, we need a few days to acclimate to the new climate before the dog can start working (whether this is in the jungle or high elevation).

For some projects we can go 18 miles in a day, others we can only go 5 km because of terrain, access, understory, etc. Every project is different so discussing the potential challenges and ultimately, being flexible about the “fixes.” Sharing with researchers that our schedules are not the  “normal,” Mon- Fri, 8- 5 pm schedule is also something worth mentioning as detection teams maximize on times when odor dispersal is best.

Will the dog teams work alone or accompanied by a researcher?

Some researchers want to be with the detection team throughout each survey, others appreciate that we can operate independently. I think sharing that if a researcher does not have the time to be in the field with us each and every day, they might be interested in pursuing the method more (because they might be under the impression that it would be a huge time commitment for them, otherwise). Conversely, other researchers have been aghast to leave the data collection up to our teams, and want to be there every step of the way. I think explaining that both options are viable depending on the study design might help dispel some misconceptions/ alleviate some concerns.

For much of the work we do (CDH) we don’t necessarily need help with data collection, and our collaborators are fine with us collecting the targets or data, but it is really helpful in some cases to have a “bio-shadow” or assistant who can assist with keeping an eye on sensitive wildlife (so we can avoid disturbance), visually searching for other clues that the dogs might not key in on (very old guano), assisting with navigation and area coverage, since we might be working in areas that are very familiar to the researcher but not to us.

Are dog teams the right choice for your project goals?

Some targets are not easy for the dog to detect in a wild environment; some species may be dangerous to the dog; some terrain may not be conducive (steep cliffs). Is a special use permit or endangered species permit required, or can an existing permit be modified? How long will this process take? It’s good to plan ahead as the process may take up to a year.