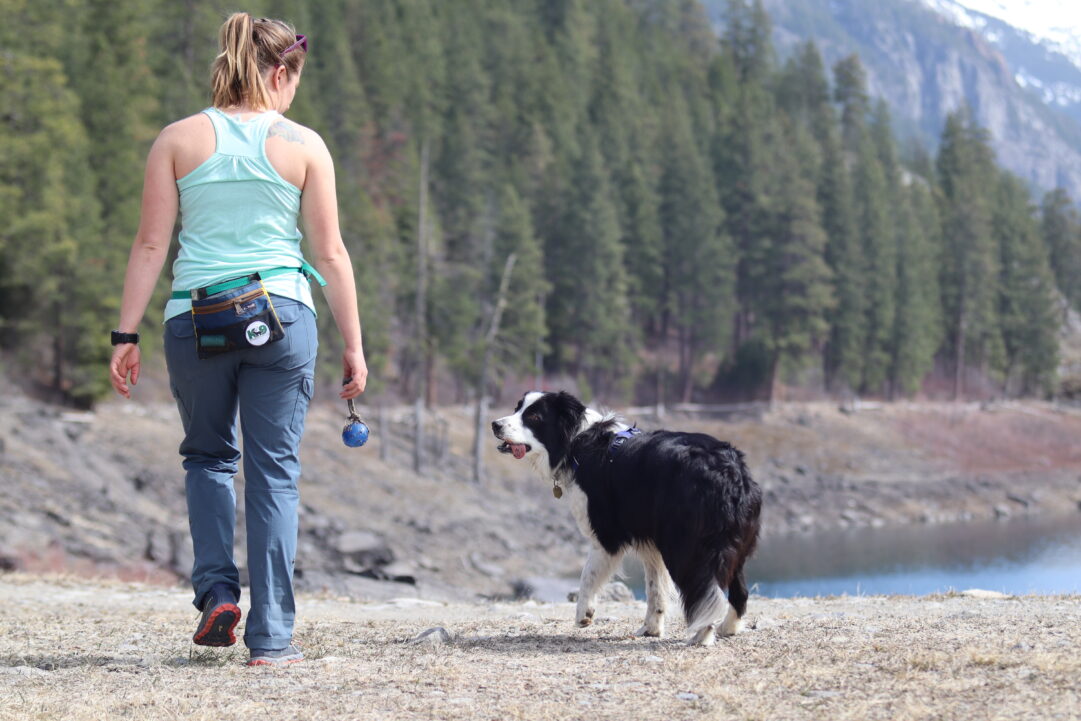 Not All Days are Good Days

I wake up nervous, having barely slept. Today is our first day at the wind farm since October 2021. I’m partially excited to handle Barley again, partially nervous that Niffler won’t be as brilliant as I remember. He is still very young (21 months) and is constantly in Barley’s shadow.

Just 2 weeks ago, Niffler had a horrible training session in Jasper where he missed the target and was off-task for the majority of the session. As I drive to the field site in the pre-dawn glow, I think. Will I have to put Niffler on the bench for this season? Wait for him to mature a bit? Intact teenage boys can be tough, and Niffler has always been lower-drive than Barley.

This lowered drive for toys means that Niffler isn’t quite as single-minded in the field as Barley. For Barley, it’s rarely worth it to deviate from a task if the task could earn him his ball. He is possibly the most ball-obsessed dogs I’ve ever encountered, and that includes a lot of military working malinois.

Don’t get me wrong, Niffler loves his frisbee and his ball-on-a-rope. His pupils dilate, he fetches until he’s too hot, and he pushes me to play more and more and more. He is also much more independent and naturally sniffy. To Niffler, it’s worth a delayed possibility to access a game of fetch if that means he can stick his nose in the dirt and track a mouse for a few moments.

All of this negative talk about Niffler swirls around my head as I get to the field site, but the second I get out of the car and put on my training pouch, I feel lighter. I know what I’m doing here, and so do my dogs.

On our first search of the day, Barley is superb. He’s really showing off for our site manager. I expect nothing less from him and barely appreciate him the way I should.

Niffler’s first search is hairier. There are no targets to be found (Or did he miss them? Whispers the voice in my head that also suggests I neuter him and become an accountant). Worse, he smacked full-speed into a live electric fence. I had disconnected the wire, which normally does the trick. This fence is unusual and must be turned off at the power control.

He gives a terrible little yelp and hits the deck, ears pinned. I call him to me and he launches into my chest, tail wagging low and fast. After some baby talking and cuddles, he’s ready to go back to work. I’m willing him to find a target – as much for his confidence as for mine now. No such luck.

The day rounds out to be a pretty good one, with both dogs making finds and having a good time. We get home exhausted and the boys start snoring immediately. I rinse the sunscreen and sweat off my face, rub my eyes, and sit down to work on grantwriting, PhD applications, emails, course preparation, outreach, timesheets, data sheets… the list goes on.

It’s 8am and the sky is crystalline. The wind is whistling from the north. Barley is resting after his first two searches of the day and now it’s Niffler’s turn. We see some cattle about 300m away, but that’s far enough away for him to work nicely. He starts his search, tail up and running with his nose to the wind.

As usual for his first day’s search, he’s running with the turbo on. I move slowly, letting him range a bit and get the jitters out. His loops get smaller and smaller and he settles into a more sustainable work pace.

As we crest the rise near the wind turbine, cattle start moving along the horizon. One group of 20 yearlings is at 2 o’clock to us; another around 10 o’clock. Grazing or resting cattle are one thing for Niffler to ignore; moving stock is another thing altogether.

Niffler’s tail and head drop. He’s in full, gorgeous, slinky border collie stalk mode. His eyes and ears are locked on the cattle and his focus is exquisite. But he is absolutely not searching.

I’m about to call him as he slinks toward the cattle when he drops into a down about 65m away from me. For a half second, I wonder if this is part of his new stalking behavior. Dropping to the ground is an integral part of herding dog’s repertoire, but I’ve never seen Niffler offer that behavior around moving stock.

This drop also looks wrong for herding behavior. When herding cattle, a dog would generally drop with their eyes locked on the cattle. They’d be a coiled spring, ready to dart off in the correct direction to balance the herd. Niffler also doesn’t have any control over this herd yet, so his herding instincts “should” be screaming at him to loop around them and collect them.

Instead of looking like a frozen missle, Niffler is relatively relaxed. He turns to look at me, tongue out in a relaxed “grin.”

He holds his down, barely flicking an ear.

I hustle towards him, ready to throw a party no matter what. Either he chose not to chase them because of our recent animal interactions training, or… He’s got a perfect little target between his paws.

We throw the hugest party EVER.

Even as he stalked the cattle, something in Niffler’s brain must have caught the odor of the target. I don’t remember seeing a clear change of behavior as he sourced the odor, but the proof is between his paws. Somehow the odor of our target overrode every fiber of what it means to be a herding dog and Niffler told me about it.

I’m constantly undermining and second-guessing my training, Niffler’s genetics, and our strength as a team. And he’s constantly proving me wrong.

Tricks are for Safety

As we approach our sixth turbine of the day, I see a group of 10-15 cattle resting in the shade of a turbine. I pull up slowly to see if they’ll move off. They readily cede the shade and amble off to watch us from a nearby rise.

I get Barley out of the car and cue him to search. He gives the cattle a few cursory glances – he hasn’t worked near cattle as much as Niffler. Despite his relatively lesser experience, I expect Barley to handle herds of moving stock better than Niffler. He’s not as “herdy” and is more focused as a searcher overall.

Barley puts his nose down and his trademark periscope tail is all I can see above the verbena, zig-zagging across plot. At the end of our second transect, I see movement from the corner of my eye. A momma cow is trotting directly towards barley, head up. I’ve worked on a few dairy farms in the past and remember the cattle being very confident at this field site last year, so I want to head this off. We didn’t have any incidents last year with cattle disrespecting the dogs’ space, charging us, or threatening us, but this cow also looks uniquely locked in on Barley.

I recall him, put him in a down, and walk her off. I move directly towards her, waving my arms and making some noise. She snorts and moseys off, walking very slowly and glancing back at us repeatedly. I return to Barley and pay him handsomely with chicken, then cue him to search again.

10 seconds later, she’s back – trotting with purpose directly towards him, following him as he searches. Again, he’s paying her no mind. I down him without recalling her, since calling him to me would actually bring him closer to her. Again, I shoo her towards the herd. She clearly doesn’t want to rejoin the herd, which has now moved over the hill crest. Now I’m a bit worried.

We restart our search, although I’m planning to cut it short and head to the car – we just have to get there. We can finish the plot later when the cattle have moved on.

I walk up to him and put him in “carwash” – standing between my knees. I feed him treats and think. How do I get us (him) out of this? The cow is staring at us from maybe 15-20 feet away. She’s not terribly agitated, but I do NOT like this behavior.

After 30 seconds of “carwash” (with lots of chicken for Barley), I ask him for a down-stay and walk the cow back to her herd. For whatever reason, this time she kicks it in a bit and actually trots towards the herd. A little calf runs up to her and they greet nose-to-nose. All is right in the world.

I release Barley to search and about 0.2 seconds later he alerts to a target.

Check out the Store